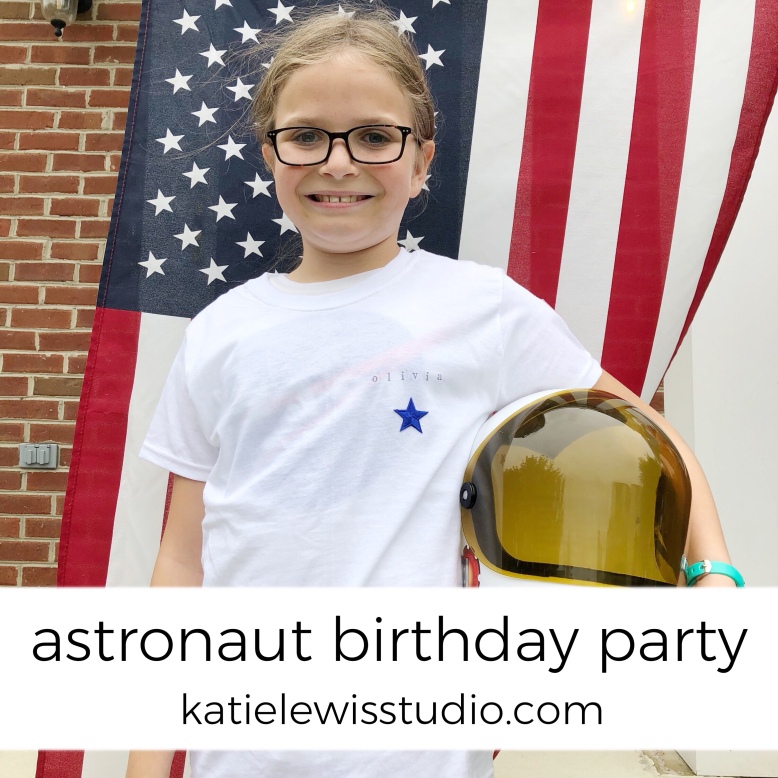 Our oldest just turned nine and she wanted everything about her party with friends to be a surprise. She’s not super into pink and girly things, so we decided to go with an outer space theme and it was so fun! We made “space suits,” did astronaut training, played pin-the-rocket-on-the-moon, re-fueled with cake and ice cream, and finished off by shooting little air rockets all over the place.

After flipping through my beloved old Martha Stewart Kids magazines, we were inspired by the spread on this space-themed birthday party, but we kept things a lot more simple. Instead of a rocket ship birthday cake we did cupcakes from a box with red, white, and blue star sprinkles. Instead of full-body space suits we did plain white undershirts I bought in bulk in the boys underwear section. You get the idea. Fun, but simple.

I prepped the shirts ahead of time by stamping on each kid’s name. I just used some alphabet stamps I had and this trusty archival ink pad I’ve used on a ton of different projects. 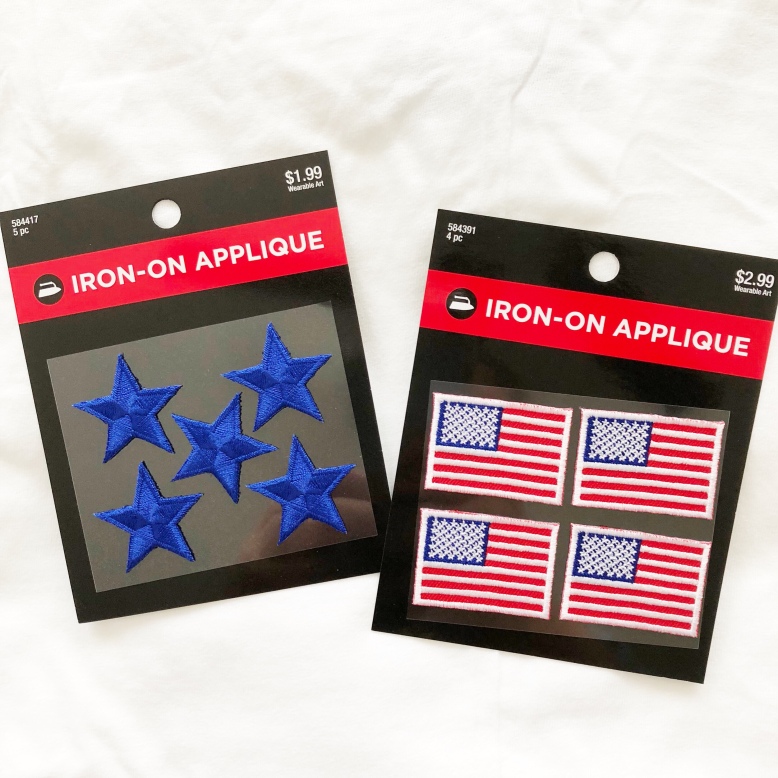 I also added these iron-on/stick-on patches I picked up at Hobby Lobby. I put a star under each name and the American flag on the sleeve.

While I was at Hobby Lobby I also picked up these cardboard shirt inserts. We were going to use some big cardboard box pieces we had, but these were so much easier and I’m sure we’ll get lots of use out of them for other projects.

Before the party started I also took the store labels off of regular some water bottles and added a star sticker and each child’s name to one of these simple sticker labels. This made the place settings extra fun and personal, but it was also really practical and handy to already have each kid’s name on their water bottle so they didn’t get mixed up.

Once everyone arrived, we headed outside to snap some quick pictures of everyone in their astronaut shirts. My husband held up our American flag (and my friend who stayed to party with us held the bottom of the flag down since it was a bit windy out) while I snapped pictures of the kids posing like astronauts.

We already owned this play astronaut helmet, so we had the kids hold it in the pictures to make it look more like the traditional pictures of real astronauts. I also saw this astronaut photo idea which you could try if you didn’t want to go buy a helmet. 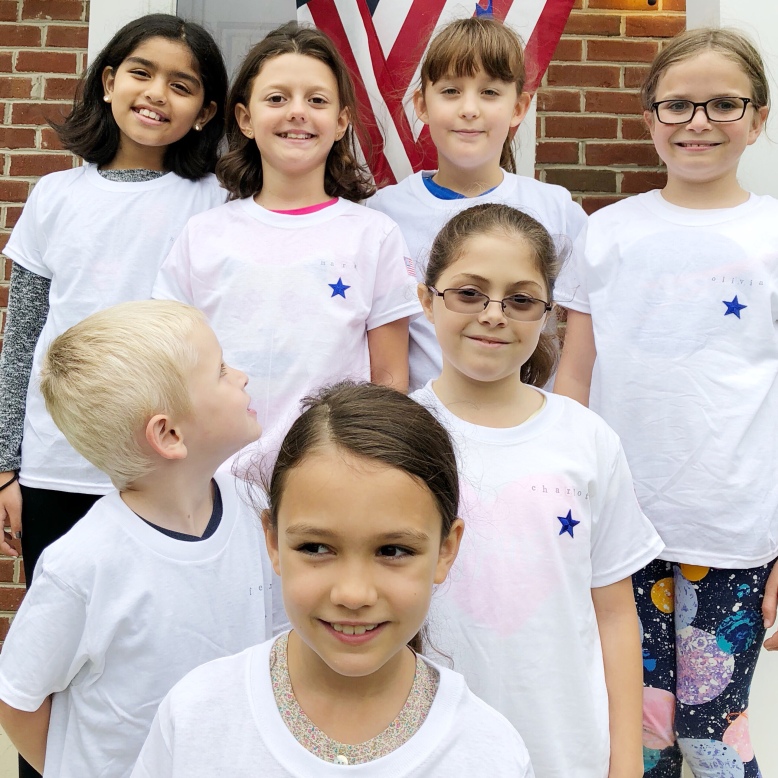 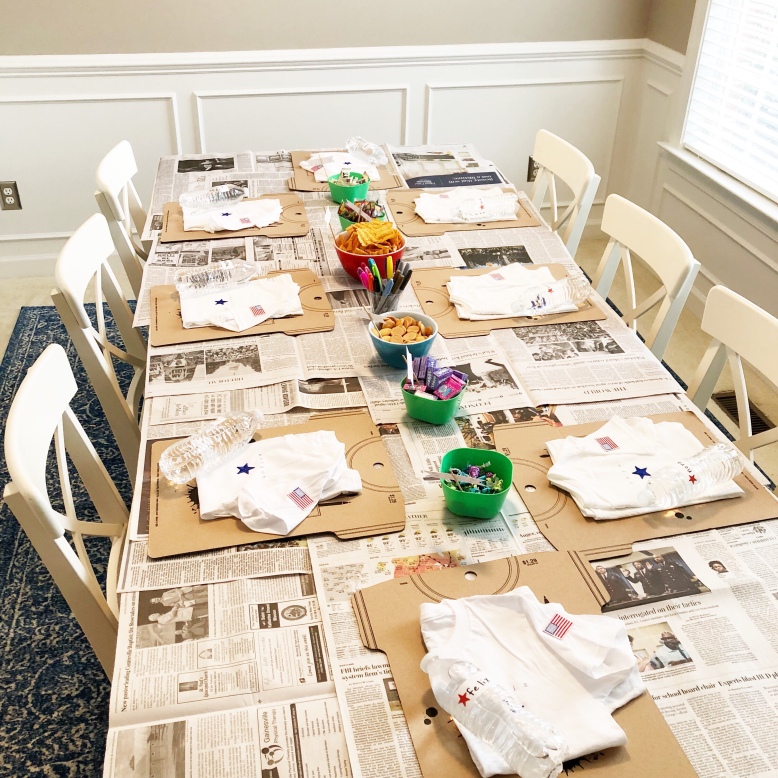 Once we were finished with pictures, we came back inside and the kids snacked on outer space-themed goodies while they decorated the back of their t-shirts with Sharpie markers.

We slid the cardboard t-shirt inserts inside each shirt before they started coloring and they worked great. None of the marker came through the front of the shirt and the kids were able to color without any problems.

For the snacks I mostly just wandered around Target looking for anything I could fit into a space theme. I went with “meteor showers” (nerds), sun chips (get it?), “milky way” (hershey’s cookies and cream bars–and yes I know there are real milky way candy bars, but I’ve never loved them and didn’t want to buy a whole bag), “alien kisses” (monster kisses from the Halloween candy section), “Saturn’s rings” (big life saver gummies–also considered peach rings, but went with these since they were individually packaged and could go in the party favor bags too), and “mini moons” (mini nilla wafers).

Any other good ones you can think of? 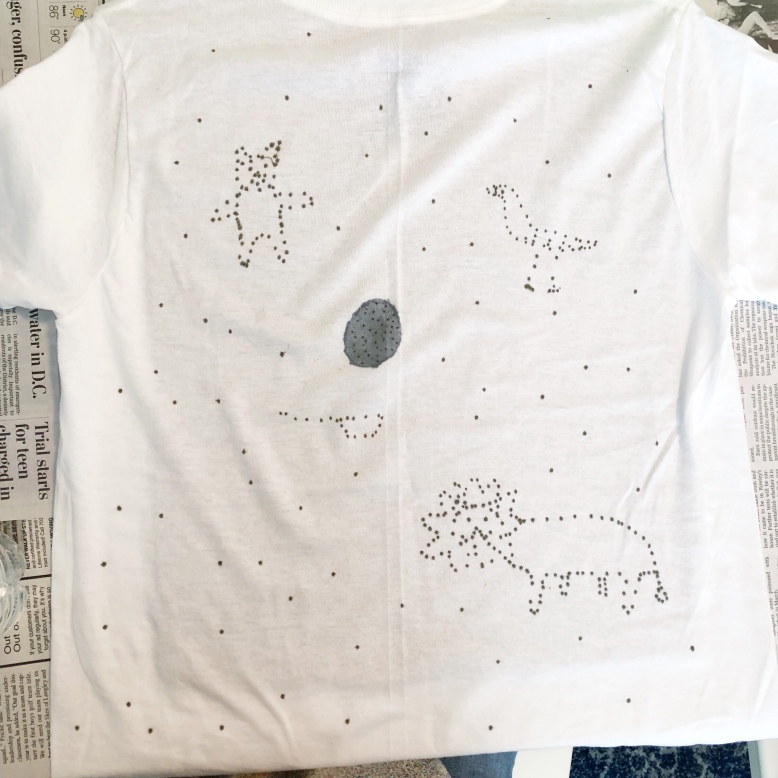 The kids had a blast coloring on the back of their shirts. Some drew constellations and planets, some drew american flags, the younger kids just scribbled. It was a great activity that was easy and kept them entertained for quite a while.

We had thought about using fabric paints, but we wanted the kids to be able to wear the shirts during the party without having to wait for them to dry and the Sharpies worked out great for that.

Before the party started we just covered the table with old newspapers to protect against stray sharpie marks. A plastic tablecloth would have worked well too.

When the kids finished decorating their shirts we also had them each fill out an astronaut bio and color a rocket ship. More on those below. 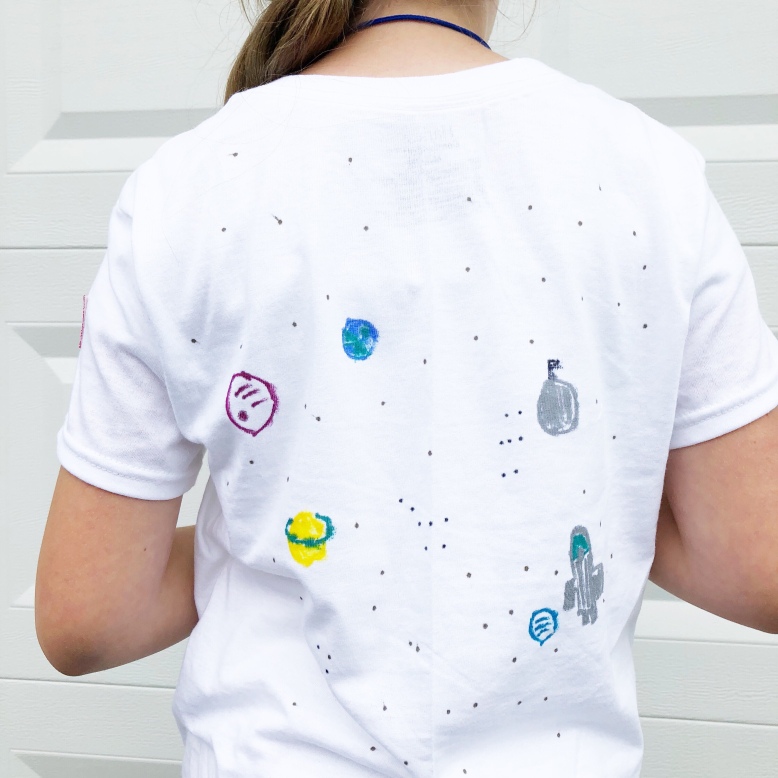 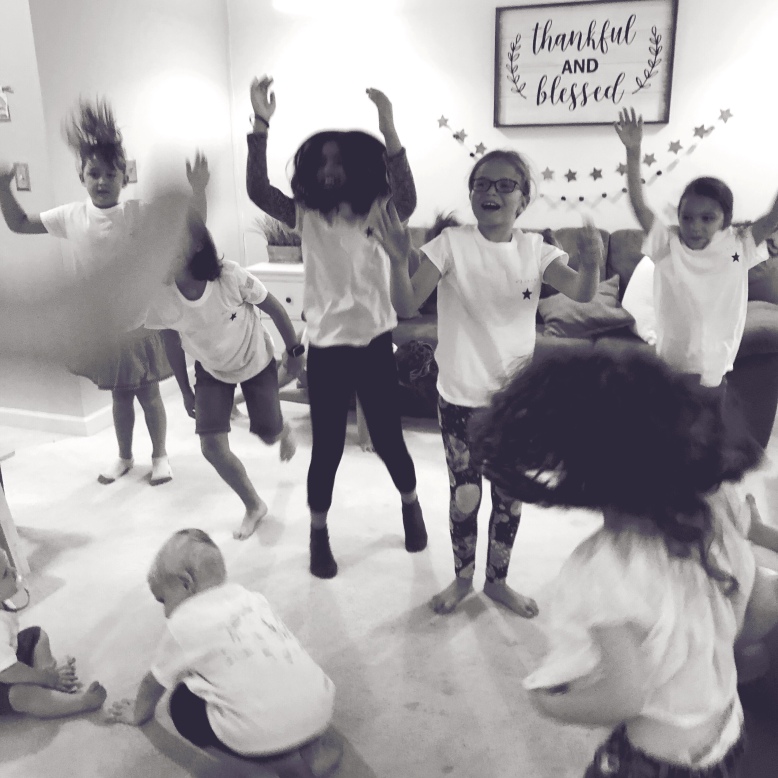 Next up, time for astronaut training! My husband put together a fun battery of physical challenges (jumping jacks! burpees! spinning in a circle and then walking in a straight line! using tweezers while wearing winter gloves!) and questions for the kids about outer space.

You can see and print the page that he put together right here along with the party schedule we made. These pages are free to print and use, but are for personal use only.

Once they finished the astronaut training, we had a little graduation ceremony and it might have been one of my favorite moments of the party. My husband played pomp and circumstance from this youtube video in the background while he read each kid’s astronaut bio aloud and I placed a necklace with bubbles in a star-shaped container (via the Target party favor section) around their neck.

It was such a little thing, but it was pure joy watching each of the kids really sincerely beam with pride while the music played and everyone listened to the things they wrote and clapped for them. 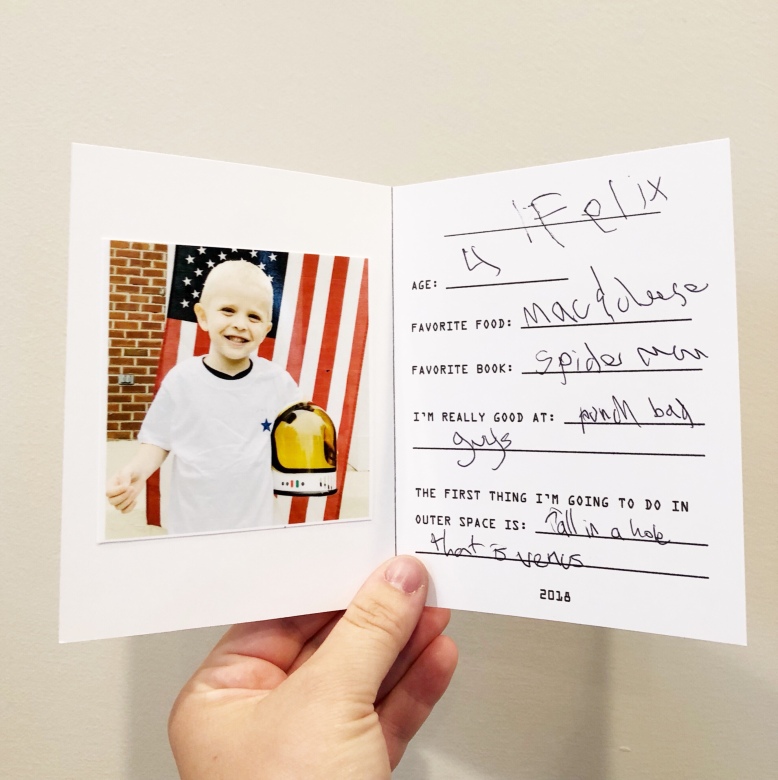 These are the little astronaut bio cards each kid filled out. You can see and print them right here. These printable bio cards are free to print and use, but are for personal use only.

To use, just print on cardstock, trim along dotted lines, and then fold down the center.

While the kids were doing astronaut training, I uploaded the pictures I had taken to my computer, printed them off on photo paper, cut them to size, and stuck them inside the cards using double-stick tape.

I also have this Poloroid 300 camera in black and we thought about using that instead, but we didn’t have enough film on hand and we had a lot of photo paper for the printer, so we went that route. On the one hand, it would have been a lot faster just using the Poloroid. On the other hand, it was nice being able to snap a few pictures of each kid and choose the best one. But if I were running the party without help it would have been worth it to go pick up some extra film.

Once the kids had all graduated from their training, it was time to blast off to the moon!

I used this great free printable moon from Mr. Printables. (If you’re not familiar with it, it’s such a great site! So many high quality printables for free.) We’re currently in the middle of a science unit on outer space for homeschool, so I printed our moon on cardstock to make it a little more sturdy for school projects in the future. I also went the extra mile and taped it all from the back so the front would look a little more seamless.

For the rockets we used the free printable from this fun straw rocket activity, but in my print settings I sized them down to about 65% so they wouldn’t be enormous on our moon. Each of the kids colored their own rocket and wrote their names on the back. When we were ready to play our game I just stuck a piece of double-stick tape on the back of each rocket and they were good to go.

We played the game like regular pin-the-tail-on-the-donkey with a blindfold, a spin, and a try to get their rocket as close as they could to the location of the first moon landing (marked by the star sticky note). Simple and fun!

Time to refuel with cake and ice cream!

Like I said above, these cupcakes are pretty simple. Just baked them using a box mix and then added some homemade frosting and some sprinkles.

I piped the frosting on using this big Wilton 1M tip and it made the frosting go really fast and look way fancier than my usual method of swiping it on with a butterknife. If you use it just make sure you get a large coupler first since this tip is larger than the standard size.

We sang to the birthday girl, ate our cupcakes and ice cream, and then the kids gathered around to give their presents. I don’t think presents are a must and I can definitely understand why some parents prefer not to have guests bring gifts, but there sure is something magical in the way children love giving gifts to each other. It’s so fun to watch. 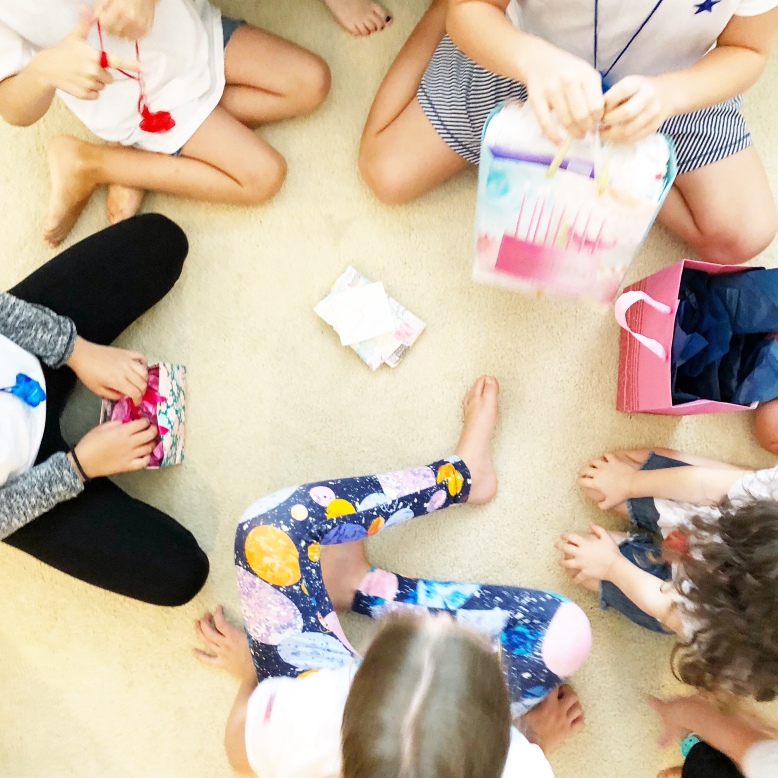 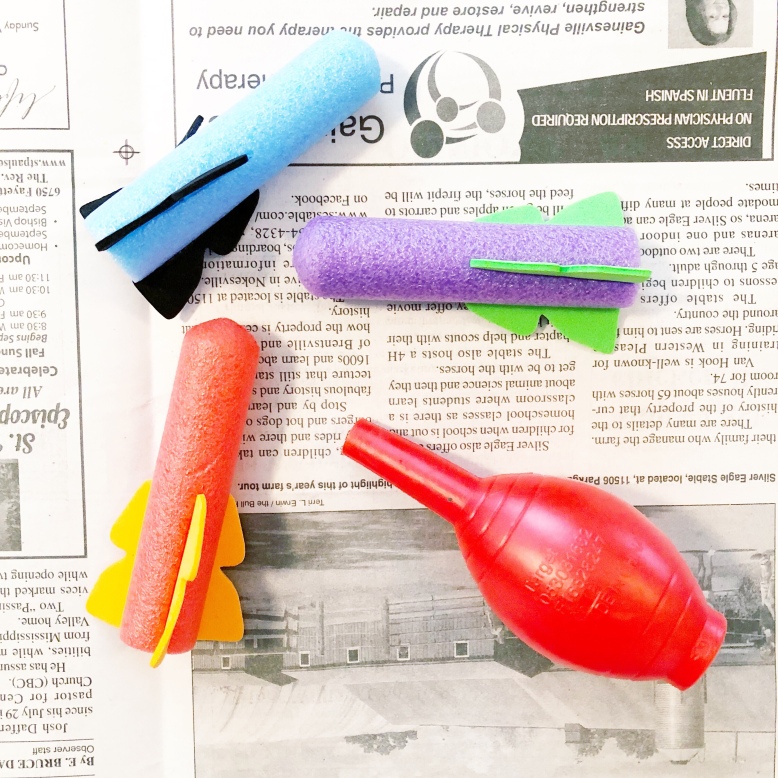 Once they were done with presents, we brought out these little air rockets I found in the party favor section at Target. I bought a couple packs so the kids could have plenty to run around with and they each took an air shooter and a few rockets home too. You just slide the little styrofoam rocket onto the red air shooter, squeeze the bubble part, and the air shoots the rocket forward. Pretty fun!

When it was time to go home each of the guests also got a small favor bag with some of the candies we’d had out, a punch balloon, alien finger puppets, gushers, and their astronaut bio card. Glow sticks would have been fun too, but I couldn’t find any in time. 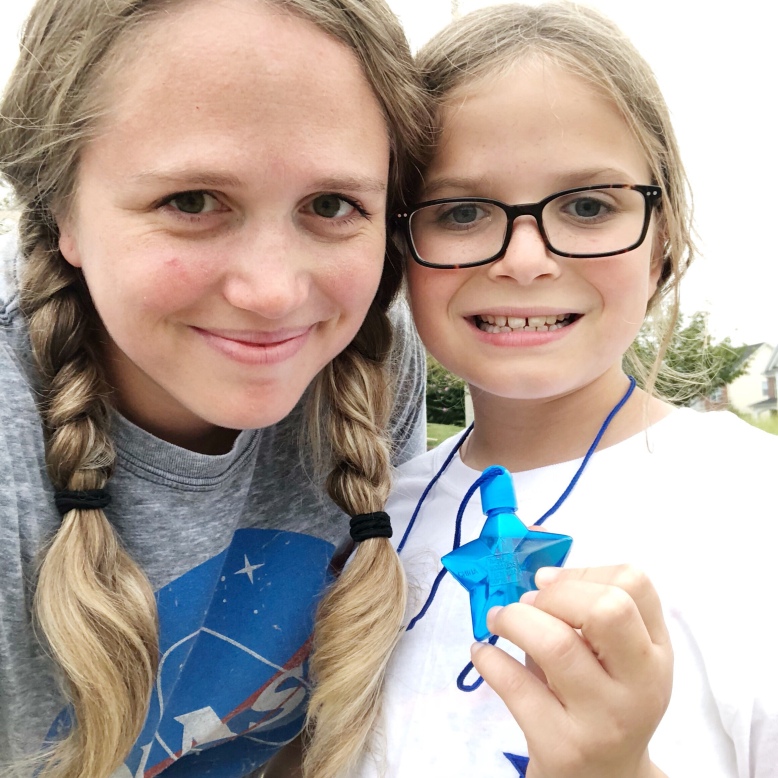 All in all, it was a great party with some great kids! Our party lasted about two hours and the time flew by, but I was happy we were able to do all the things we had planned! Lots of birthday fun!